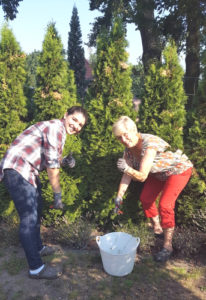 I had just arrived in Germany and after being awake for many, many hours, I was almost at the end of my journey. I was riding a train from Frankfurt Airport to Berlin with two very kind AFS-Germany volunteers and two exchange students, both nervous to meet their host families for the first time and for what lay ahead this year. Despite the urge to sleep, I peppered the volunteers with questions about being an exchange student and German culture.

One thing they told me was that, despite the jetlag, I should get up at a reasonable time the next day and not sleep all day. So I decided to set my alarm and woke up at 9AM. Back in the U.S., I’d be the first one awake in my family on a Saturday morning if I got up at that time. I assumed that when I got downstairs only my host mother would be there, but I was wrong. Still in my PJs, and with my hair looking like a bird’s nest, I walked in on a breakfast with my host family, including my host grandparents!

With the little German I knew, I awkwardly told them that I was going to change my clothes, and I walked back upstairs. When I went back downstairs they waited as I ate breakfast, which was bread with butter and jam along with a hardboiled egg, and then we started work in the family garden. I got to trim lavender bushes that smelled amazing, and I spoke with my host grandmother (who knew no English) using the sparse GermanI had learned in the U.S.

Then, once we were all finished and sitting at the table again, my host grandfather asked me if I liked to play “Phase.” At first I was very confused, but then he pulled out the deck of cards and I almost burst into tears: “Phase 10” was what he meant, and it turned out to be one of my favorite games that I played in the U.S. with my family all the time! It was the game that I least expected to find in Germany. I probably scared them a little with my reaction, but I was just so happy to see something so familiar on my first day in Germany. We ended up playing several rounds and it was lots of fun and full of laughs. They all made me feel so welcome.

This is just one example, and now a month and a half later, I’ve had many experiences similar to this one. Before I came to Germany we were told at our orientations many times that we need to keep an open-mind, but it’s very hard not to have expectations when you’re trying to be prepared for any kind of situation. All the exchange students were imagining scenarios, but there is no way to know exactly how things will turn out. While coming to terms with that is challenging at times, little by little I’m learning to make the most of my experiences. Things won’t always go the way you think they will, but sometimes it’s for the best so that even better things can happen to you.