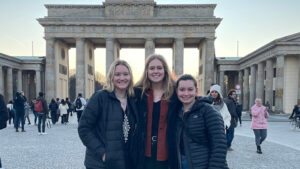 The German Bundestag and U.S. Department of State are pleased to announce Leah Byrne as the May 2022 Congress-Bundestag Youth Exchange (CBYX) U.S. Participant of the Month! Leah, a CBYX vocational participant from Colorado, is hosted by the Brunk family in Berlin.

COVID restrictions kept Leah from really exploring her career possibilities during her last two years of high school in the United States. Because of this, she approached her exchange year as an opportunity to try as many things as possible. Leah has certainly achieved this with four internships in five months! After her German language training and German high school semester concluded, Leah started in a dental practice. Expecting to just work in the administration office, Leah was shocked to find herself assisting with patients on the first day. While using suctioning equipment during dental procedures may not be her ultimate career path, Leah notes “interning at the dental office was one of the most interesting experiences of my life! I learned so much about something I had never even considered as a career.”

Leah was also very interested in learning more about why Germany is often synonymous with beer, so she reached out to two breweries about internships and both of them accepted her. Her first brewery internship was with Bräugier Craftbier helping with accounting and their social media marketing. This was a great way to expand on social media skills Leah had developed in her high school volunteer work and gave her unique insights into managing a consumer focused business. Her second brewery experience had her working on the production floor of Lemke Berlin, a large brewery in Berlin. Being on the production floor was hard, physical work and Leah jokes that “I didn’t need a gym membership during that time!” In fact, on her second day on the job she even got a shower, unfortunately of beer, when she forgot to turn a valve off before disconnecting a hose. Leah points out that, after being drenched once, you learn to always double check the valves so you do not make the same mistake twice!

Not many women work as brewers in Germany, so on International Women’s Day Leah and the other 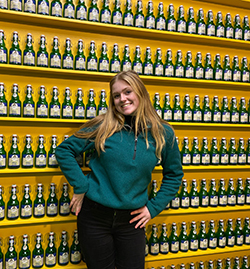 woman working at Lemke Berlin were featured on social media and participated in a special women’s brewing event to help encourage more women to join the field.

Leah is currently interning as a teaching assistant at a special education school, which has rekindled her passion for working with people with neurological and physical disabilities. Leah was exposed to this work as a member of her Fort Collins High School’s Unified Pals club in the United States, but only through her current internship has realized she has found her true passion. She is looking forward to attending Oregon State University to study neuroscience as the next step in her journey.

Leah has also learned a lot from her host family. From her bedroom window in the host family’s home in former East Berlin, Leah can see where the Berlin wall used to stand. Leah has a new sense of history thanks to her host parents’ stories about growing up in East Berlin during the Cold War. Her host family has also learned new things by hosting Leah. Leah loves Mexican food, and was delighted to introduce her host parents to tacos from a taco truck. Leah has also had the chance to be a big sister to her host sisters. Being the youngest at home in the United States, Leah very much enjoys the role of older sister. 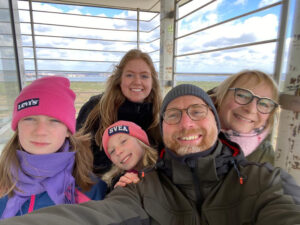 Her host father has also encouraged Leah to help wherever she can and has taken her to volunteer with Ukrainian refugees arriving in Berlin’s train stations. Leah has been able to use her English and German language skills to help those fleeing Russia’s war in Ukraine. Working with people who have left everything behind except for two plastic bags of belongings or the cat they carry in their arms has reminded Leah about how fortunate she is to have the opportunity to explore the world as an exchange student. “You can turn on the tv and see what’s happening, but when you go there and see it with your own eyes it takes it to a whole other level.”