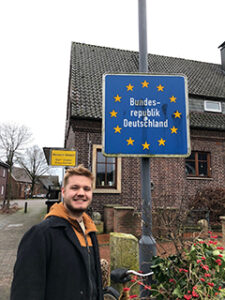 The German Bundestag and U.S. Department of State are pleased to announce Nolan Hamilton-Kraft as the April Congress-Bundestag Youth Exchange (CBYX) U.S. Participant of the Month! Nolan, a CBYX high school program participant from Saginaw, Michigan, and recruited by Youth for Understanding, is hosted by the Sarholz family in Bottrop, North Rhine-Westphalia.

Nolan is currently helping local sixth graders improve their English. He describes this as a “very fun opportunity to work with students, eye-opening as well, especially when asked linguistic questions like, “Why is this way or not that way?” During the exchange of languages, conversations have ranged widely from the American Dream to video games to Nolan’s relationship status. Having been introduced to a pen pal exchange program in middle school, Nolan was inspired to start a similar program between middle school students in Germany and the United States. He believes this will encourage students to continue developing their mastery of the English and German languages respectively.

Nolan is used to embracing new cultures, having lived in Michigan, New York, and the U.S. Virgin Islands. He reflected how even within his home country, there are so many different cultures. “It’s easier to point out the differences, but I focus on what connects people because […] the thing that connects everyone is emotions. Maybe I don’t speak the language […] but we still feel the same things […] When we think about this stuff, it becomes more personal, and the world feels more connected.” Undoubtedly, Nolan’s presence in Bottrop has helped connect the United States and Germany in a personal way. You can hear more about Nolan’s thoughts and experiences in his YouTube video (in German with English subtitles) found here: https://www.youtube.com/watch?v=1Ts8pQfVwpk

Reflecting on what he’s come to love in Germany, Nolan looks forward to bringing home his newfound love of sourdough bread. He notes that Germans have an immense love for their sourdough, and he is now adapting his beloved peanut butter and jelly (PB&J) sandwich. He suspects he’ll be making future PB&J sandwiches on sourdough for years to come. Another cultural trend he hopes to bring home is how on a typical Friday night in Germany, friends gather at one of their homes and simply spend time together chatting, with no set plan. Nolan describes it as “a fun social thing that doesn’t require a lot of money,” and is certainly something he looks forward to fostering with friends in the United States.

Beyond gaining a deeper understanding of what some may consider typical 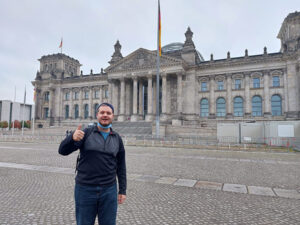 German culture. Nolan’s host grandmother comes from Japan and his host family’s Japanese roots have added an extra layer to unpack in his cultural exchange. This has further exposed Nolan to Japanese customs and traditions, including learning some Japanese language and cooking. Prior to CBYX, Nolan didn’t realize how extensive the Japanese diaspora in Germany was or how closely connected these respective cultures and traditions could be. Nolan is grateful for this special experience to explore two incredible cultures simultaneously.

His time in Germany as a cultural ambassador has shaped his view of the United States’ role in the world. “The American identity is complicated, it’s wrapped in being a cultural, economic, and political power that the whole world looks at. With the invasion of Ukraine, the conversation was very focused on what America would do. They watched [President] Biden’s speeches in class. When there’s a problem, everyone looks to America. The power of being an American is being able to connect the world in different ways – uniquely American. Having America as a middle ground is a great way to get people connected.”

“If people just learned more about other people and cultures there is so much more we could do and accomplish.” Nolan looks forward to returning to the United States and continuing to serve as a cultural ambassador in his hometown of Saginaw, Michigan.