Each year, 350 German students spend time in the US as part of the Congress-Bundestag Youth Exchange (CBYX) program. For many, the program can be a life-changing experience. 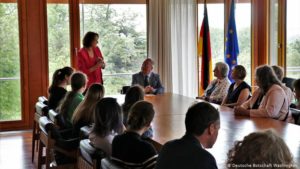 A group of 18 German students are sitting around a conference table in the German embassy in Washington, reflecting on their 10-month stay in the US as part of the Congress-Bundestag Youth Exchange (CBYX) program. For many of them, the country now feels like a second home.

What was their experience like? Has their picture of the US changed during the course of their stay? And how has the exchange program impacted their lives?

Ilayda Dogan, a 16-year old schoolgirl from the Sauerland region in western Germany, admits she was skeptical when she first arrived in the U.S. But pretty soon, she was pleasantly surprised by the country: “I never guessed both countries have so much in common culturally.” Dogan was hosted by a family in Haverhill, Massachusetts. And she says many Americans showed  great interest in and knowledge of Germany. Dogan says “to Americans, Germany is not a foreign, unknown country.” She believes the two fit together culturally. Even so, Dogan says she is critical of America’s political trajectory. 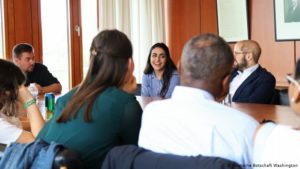 German parliamentarian Dagmar Freitag of the Social Democrats (SPD), who is the deputy head of DW’s broadcasting council, selected Dogan to participate in the exchange program. Freitag has been a CBYX rapporteur since 1998, and each year picks one German student to participate in the scheme. She says the latest cohort of exchange students went to the US in “exciting but also difficult times.” 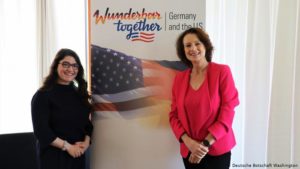 The CBYX program was launched in 1983 by German Chancellor Helmut Kohl and US President Ronald Reagan. Their shared vision was to help nurture a transatlantic networks built on individual relationships and experiences. Since its inauguration, 25,000 teenagers from  both sides of the Atlantic have participated in the scheme and spent time abroad. Many of the attended the partner country’s high schools while on exchange — experiences that shaped their lives for years to come. Freitag, for example, says that when she looks at her constituency, many former scholarship holders lived abroad at some stage.

The CBYX program is unique in that German parliamentarians not only personally select who will participate in the scheme and receive a scholarship, but also that they serve as mentors. US exchange students, too, are mentored by German parliamentarians. And one lucky US student may even be mentored by German Chancellor Angela Merkel, quips Michael Reinold, who works for parliamentary administration and oversees the exchange scheme. Students must first undergo an elaborate application process before they even have the opportunity to talk to a parliamentarian and convince them they should be allowed to join the program.

Some German exchange students participating in the exchange have an opportunity to see the internal workings of US politics. Dogan spent a month working as an intern for Chellie Pingree, a Democratic member of the US House of Representatives representing the state of Maine. Dogan says this time had a profound impact on her own political beliefs. In her case, perhaps the most significant insight she gained during the experience: She is now certain she wants to go into politics someday.

The original version of this article was published by Deutsche Welle on May, 04, 2019.

Juni
CBYX German Particpant of the Month: May