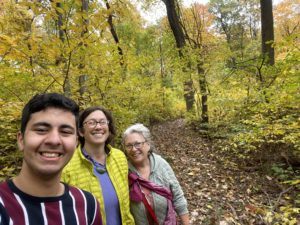 We are happy to announce the February 2020 German CBYX Participant of the Month, Ali Sahan! Ali is placed by ASSE and hosted in Mardela Springs, MD, where he attends Mardela High School.

As a self-described junior ambassador of Germany, Ali has been using his cultural exchange to impact the community around him. Ali conducted two cultural presentations during International Education Week and has completed over 100 hours of volunteer service! Ali spent a weekend assisting the maintenance team at the Wicomico Civic Center where he prepared a bingo event for the elderly and assisted with cleanup the next day. He has also been involved with Unified Tennis where he was paired with a Special Olympics athlete. Ali enjoyed giving his partner emotional support and helping him with motions that have given him difficulty. Now that the tennis season has ended, he is assisting with Unified Strength and Conditioning, where he is paired with student athletes with disabilities to compete in events, such as weightlifting, that highlight strength, speed, jumping, agility, and endurance.

At school, Ali’s favorite class is business management and entrepreneurship. He particularly enjoys how his teacher includes students and encourages them to discuss the topics. He received two ‘Fame Awards’ for representing school spirit, a ‘Mind and Motions’ award for participating in a school sport and achieving a 3.0 GPA, and an ‘Unsung Hero’ trophy from his Unified Tennis Team. Ali’s extracurricular activities include chess club, culture club, assisting in the library and media center, the school musical, and student government.

Ali has had many adventures with his host family including a camping trip to Boston, camping in a torrential downpour, weekends with his host grandmother, riding 100 miles on a bicycle for a fundraiser, and many more. His host mom, Kelly, describes him as always positive and encouraging. He is always willing to try anything and has a good attitude when doing it. Kelly also describes Ali as intentionally kind, socially adept, and always willing to give other ideas pause and thought. Ali’s host grandmother says, “I think of perseverance to describe Ali Sahan.” In all he does, Ali is driven in his aspirations, respectful of others, and radiates friendliness and positivity.

Department of State
Bureau of Educational and Cultural Affairs