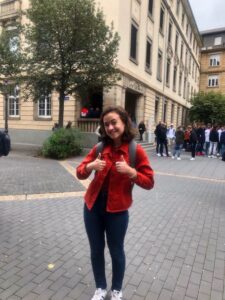 Grace W. shares about her first week at her host school and her host community.

I have officially survived a week of German high school!

This week, I followed around my host sister in all of her classes so that I could learn how school works before I get my own schedule on Monday. My first day of school was really exciting, but also overwhelming! The classes are much more discussion-based than my classes back home (usually the teacher would have a PowerPoint or some sort of lecture presentation), which is a little difficult because my German isn’t good enough to understand or participate in the classes. At least I can understand English class, though! (Side note: I’ve already learned a lot about English grammar that I didn’t even know, such as the difference between “whether” and “if.” I honestly didn’t even know that there was an actual difference).

The class schedules here are very similar to college classes back in the U.S.; each day, the classes start at a different time. Sometimes, my host sister doesn’t have to be at school until 9:55 AM, but sometimes she doesn’t get home until 5:30 PM. You also have different classes every day. Everyone has to pick three main subjects to study, called the “Leitungsfächer,” and those are the classes that you have three or four times a week. You also have to take other required classes, but you don’t have them as often in the week. It’s pretty comparable to having a major in college and having more of your major’s classes than your other requirements.

Even though classes in German can be overwhelming, I’m hopeful that my German will improve by trying to do the homework and listening to my peers in class. The teachers have been really nice, and I’ve met a lot of people!

Other than school, I’ve done a lot! I had my first falafel döner, which was spectacular, and my host sister and I got sushi on Tuesday during her two-hour break. On Thursday, my host mom and I got ice cream and walked around vineyards/a park after school. The views were incredible! I also played with my host parents in their community orchestra concert on Friday and Saturday, which I really enjoyed.

I can’t believe that I’ve already been in Germany for over a month. I’ve officially been in my host community for a week, and while it’s been quite an adjustment, I”m really hopeful for what my time here will hold. My host family is so incredibly supportive, and I feel so lucky that I have them!

I have a lot to explore, a lot of people to meet, and a lot of mistakes to make. With everything that I’ve experienced just in this first week in my host community, I can’t wait to see what I have lying ahead.