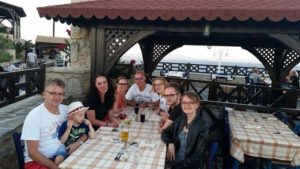 It’s difficult to talk about my exchange experience in any kind of condensed way – there is just so much I could say! As my wonderful friend Steffi once told me, a year abroad is like a compressed life experience. Many of the ups and downs of life happened to me these past months: I saw some relationships grow stronger as the year went on, while others faded somewhat; I learned an entirely new language; I immersed myself in the culture and traditions of my host community; I became a daughter and a sister.

Like many CBYX students, I came to Germany and couldn’t even introduce myself in German. I was lucky, though, and my family spoke enough English for us to have simple conversations until I got a grip on the language. But I’ll warn you now: just because you can’t really speak German doesn’t mean you should keep asking English just so you can talk to people. Yes, it may be easy, but you are coming here to learn German, so that’s what you need to do. I made the mistake of letting my schoolmates speak to me in my native language at first. It made me learn a lot slower than I would have if I was speaking only or mostly German from the beginning, even if it was a bit broken. I was too scared to make mistakes, but how are you supposed to learn if you don’t make mistakes? I can’t stress enough the importance of speaking German. I’ve said so many embarrassing things to people – once, I tried to ask my host dad if he wanted to change the channel on the TV, but I asked him he wanted to change his clothes instead! It was super embarrassing in the moment, but now I think it’s hilarious!

I quickly fell in love with German culture after getting to Germany. I was lucky enough to enjoy many unique experiences here because I sought out culturally traditional activities and events, such as the Schuetzenverein, and a local Oktoberfest, where I got to wear traditional German dress (called a Dirndl). I had a wonderful time! I also got to experience Karneval, which is similar to Halloween, but more fun and not as scary. I lived in a little town called Eschweiler, which is especially known for their Karneval celebration, the third biggest one in the whole of Germany!

And finally, my host family. This is what I love talking about the most, because I have so much to say about my host family – they were amazing! I had five host siblings, ranging from four to twenty-three years old, and I have so many nice memories with them from the year. I was especially close to my host mom. We would sit at the kitchen table every morning for breakfast and talk about everything from our dreams from the night before to my family’s lives back in the U.S. I really felt like I belonged, which was one of the very best parts of the year for me.