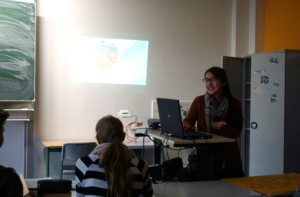 My presentation was about comparing German and American stereotypes. I gave information about my life in school and at home to provide a perspective about how I live and how it doesn’t necessarily conform to the stereotypical American teenager.

It was fun to formally answer questions that addressed stereotypes. For instance, my English teacher asked me if Americans really mean what they say when they tell someone, “You should come over some time!” When I answered that most Americans might not mean it unless they say it twice, he was a little shocked, because Germans would never offer something like that without truthfully meaning it, and operated with a different communication style.

His reaction opened me to the directness and honest nature of German culture. I’ve never really thought twice about this phrase. From an outsider’s perspective, I can understand why this would seem superficial, or even untrustworthy, which is something that I’ve never given much reflection on before. Before this experience, I always thought that this was an expression of politeness.

I was able to share my family’s history, because I thought it was confusing to see an American of Chinese descent for some of my schoolmates. I explained that my parents came to the U.S. in their 20s and that I was born in New York. I was happy to represent the diversity of the U.S., and to present my point of view as a Chinese American in the United States.

I was also able to explain that U.S. cuisines are very diverse, given the different types of cultures that the United States welcomes. I explained the different boroughs of New York City, my hometown, and the difference between schools in Germany and the U.S. I was asked which school system I preferred more, but I didn’t want to state any judgments. Instead, I shared what I liked about American and German schools; I prefer the flexible schedule, tutoring hours, lockers, diversity, and abundance of school clubs and sports in the U.S. In German schools, I prefer that students stay in the same class and travel together because they form stronger relationships with one another and the class teacher. I also prefer the longer pauses of 15 minutes between every 2 periods, the emphasis on class participation as opposed to testing, the grading style (1-6), and no SATs!

It was also interesting to see the reactions of my classmates as they at the snacks I brought in. Some said the candy was really sweet, and therefore confirmed their belief that sweets in the US are super sugary. Others really like the American version of the brownie.

Overall, it was a pleasant experience! I really enjoyed sharing information about my American culture. I plan to give similar presentations to different audiences throughout my time with CBYX.