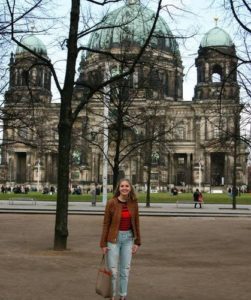 If people were airplanes, my house would be Newark Liberty International Airport. With the hustle and bustle, ins-and-outs and constant, vibrant motion, my house has always been the reliable place to land. Whether it be my Middle Eastern cousins staying for three nights, or my brother’s Scottish camp counselor staying the week, our guest room always tends to be filled, and quite frankly, I like it that way. I enjoy getting to know the guests that I’ve met at my house; each individual life that touches me has a domino effect, changing even the slightest bit of my thoughts, my considerations, and my biases. Often, these “guests” have become family, especially through our family’s hosting of exchange students through AFS.

Opening our home to exchange students has made countless global connections and inspired me to go abroad as a recipient of the Congress-Bundestag Youth Exchange scholarship with the 2014-15 class. Before arrival, I had been fluent in both Spanish and English, but had never spoken a word of German. By the end of the program, I was fluent to the point where outsiders would assume I had been living in Hannover my entire life. I was skipping my senior year, prom, and graduation, but going abroad offered me not only the technical skills of becoming trilingual, but an additional priceless skill set that cannot be taught in a classroom. I can adapt to any situation, am self-aware, am more outgoing and comfortable in professional settings, and willing to take risks, make mistakes, and problem solve from different aspects. During my time abroad, I was given the opportunity to meet with several branches of foreign service, ambassadors, and even Chancellor Angela Merkel herself. At seventeen years old, I was completely comfortable discussing foreign affairs, asking questions, and networking with some of the top individuals in their fields. My time abroad also confirmed my passion for foreign affairs and my drive to one day also serve in the foreign service or working in International Law. None of this would be possible without the funding and support of the U.S. State Department and the German Bundestag.

Aside from learning German, making friends, and adapting to a new culture, I was also tasked with applying to colleges from abroad. However, my year with CBYX only benefited my admissions process; my final decision was between Georgetown, Columbia, St. Andrews in Scotland, and Claremont McKenna College. All four schools have some of the best International Relations programs in the world and have some of the most competitive application programs. However, participating in CBYX only made my application stand out.

Ultimately, I chose to attend Claremont McKenna College after receiving the Seaver Leadership Award, a full merit scholarship awarded to 4 students each year. I am currently a sophomore majoring in International Relations with a sequence in Human Rights. When I started my freshman year here, I was passionate about supporting refugee populations, which was a widely discussed current event while I was living in Germany. My direct interests came from my own observations of how the local, state, and federal German governments were handling refugees. With this in mind, I went to the Mgrublian Center for Human Rights, where I submitted a research proposal to study German policy patterns following the Holocaust. At the end of my freshman year, I was the only freshman to publish and present my paper at the 2016 European Union Center of California’s Annual Undergraduate Conference. Additionally, I joined Claremont McKenna’s Model United Nations team, which is currently one of the top 10 in the U.S.

As a direct result of my involvement at school, I was offered a fully-funded internship at the POLIN Museum in Warsaw, Poland during the summer after my freshman year, and am working at the Ministry for Social and Integration of Hessen this upcoming summer. While my participation in the CBYX scholarship might not seem directly related, it has propelled my academic and professional career further than any other opportunity I have had. I got my summer job at the Ministry for Social and Integration because of the CBYX connection; after applying to several German agencies, the Ministry of Social and Integration of Hessen reached out because one of the CDU members working there had participated in CBYX in the 1980s. It has been three years since I drove down to Washington D.C. to begin my CBYX exchange, yet the benefits have not dissipated.

I have attended U.S. State Department alumni career sessions and received updates from their international alumni network, which has opened professional and academic connections which are exclusively available to U.S. Department of State sponsored international exchange alumni. Next semester, I am studying abroad in Vienna and in the spring semester, I am hoping to work in Washington, D.C. as part of Claremont McKenna’s domestic semester program.

International exchange opportunities like CBYX are vital to fostering a passion for foreign relations, creating understanding between cultures, and inspiring the next generation of world leaders. A year with CBYX confirmed my passion for foreign affairs, and more importantly, my commitment to the U.S. government; I am inspired to go to law school, enter the foreign service, and one day serve as an Ambassador to the U.N. or the Secretary of State.

Spending the Holidays in Germany
U.S. Department of State Selects German CBYX Student of the Month