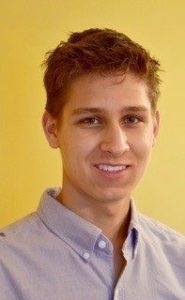 CBYX 2018-19 Participant Charlie H. of Pennsylvania, hosted in Glinde, reflects on the power of saying “yes” to new opportunities in Germany.

On one of my first trips with my host family, we stopped at a large shopping center in Cottbus. In this mall, I found a small stand detailing the different aspects of the German Bundestag. Curious, since I knew I would be visiting the Bundestag later in the year, I went to investigate. Surprisingly, there was a small section of information on the PPP/CBYX scholarship. As I was reading about it, a very nice woman approached me and started speaking rapidly in German. In my still-developing German, I tried to explain to her that I was an exchange student under the same scholarship. My host father then jumped in, and he and the woman started up a conversation that I couldn’t understand. Abruptly, she turned to me and asked, “Would you be interested in that?” At this point, I was utterly confused. However, I remembered something that I was told during the pre-departure orientation: always say yes to new experiences. Therefore, of course, I said “yes.” Smiling politely, my host father and I excused ourselves from the conversation and I quickly asked him what on earth had just happened. Without knowing it, I had just agreed to talk – in German – about my experience as an exchange student to a group of 9th grade students who were arriving in the next 20 minutes!

Since the moment I stepped off the plane in Frankfurt, I have encountered many new and exciting challenges that I never thought I would have the opportunity to experience. Many of these experiences would not have been possible if I didn’t have the courage to say “yes.” This challenge facing me in the Cottbus mall was no different. A half hour later, a large group of 9th grade students accumulated around the Bundestag information stand: it was my time. I stepped up in front of the school group and tried my absolute best, with the limited German I had, to explain the life of an exchange student. Was it perfect? Of course not. Was my German understandable? I hope so! Despite any mistakes, after my impromptu speech was finished, I felt proud to have represented my country, the CBYX program, and myself. And perhaps through all of my bumbling German, I was able to inspire future German exchange students. All through the power of saying “yes!”