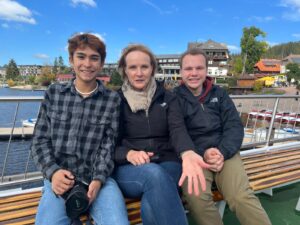 We are pleased to announce Darren Paredes as the January 2023 CBYX U.S. Participant of the Month! Darren, a Congress-Bundestag Youth Exchange (CBYX) High School participant recruited by CIEE, is hosted by the Eumann family in Hilden, North Rhine-Westphalia.

Darren is keeping busy by participating as a member of the Youth Parliament in his host city. The Youth Parliament sits on three committees (climate, youth, and transportation) at town hall meetings, and he was surprised at how many community members participate – especially since he is living in a small town. With some committees having up to 30 people participating, he is experiencing a wide variety of representation in local government.

When Darren announced that he would be going on an exchange to Germany, people offered viewpoints about what they thought Germany would be like. Once in Germany, he realized that Americans often have a misunderstanding of what life is actually like in Germany – though he is glad bratwursts lived up to the hype. When he returns home to America, he is “excited to break stereotypes” about Germany. He is continuously impressed with the German transportation system, recycling programs, and cultural traditions and hopes to share those with Americans post-program.

Darren is also learning how diverse Germany is and shares that while a stereotype is that everyone has blonde hair and blue eyes, there is “so much diversity in Germany even in his little town.” In the spirit of exploring this diversity, Darren and his host family visited one of two mosques in his city, and they enjoyed talking about Islamic traditions over tea.

In October, Darren and his host family stayed in a cabin in the Black Forest. After a long day of traveling, they played card games, laughed at his host dad’s “dad jokes,” and competed to see who would be best. He says, “it felt like nights that I would have with my natural family – it felt like home.” Darren looks up to his host parents and explains that he aspires “to be open and kind enough to act like my host parents, opening their house to host a total stranger.” 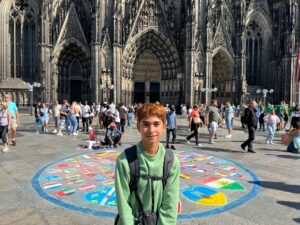 Darren believes that “exchange programs are important because even with a new age of international connectivity we still miss out on cultural exchange in a really major way. Being able to live with your host family and host community allows you to understand the people, dismantle stereotypes, and make the world a more understanding place. Exchanges allow individuals, communities, and countries to grow and learn.”

Darren’s CBYX exchange experience is pushing him out of his comfort zone and teaching him to “adapt to everything.” He explains that “the skills I’m gaining to be able to adapt to a new family and a new school will help when I’m faced with different circumstances in life.”