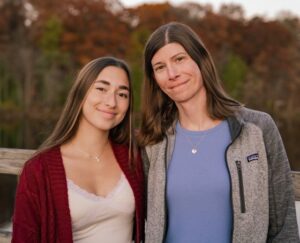 We are pleased to announce Laura Bitondi as the January 2023 CBYX German Participant of the Month! Laura, a Congress-Bundestag Youth Exchange (CBYX) High School participant placed by YFU, is hosted by Julia Josling in Jackson, Michigan.

Seeing her exchange year as an opportunity to grow, Laura is embarking on a variety of challenging classes at school such as Advanced Placement U.S. History and English Literature. She also took a History of the Holocaust and Genocide elective course during the first semester. The teacher of that course, Abby Tanner, describes Laura as “an exceptional exchange student who helped foster curiosity in the classroom, shared her expertise in Holocaust history, and raised the bar for academics in my class.” Laura said that she was interested in how the topic is taught in the United States since it’s important to teach youth about these events. Participation in this course not only gave her the chance to learn how to teach others about German history, but it also gave her the opportunity to connect and grow close with her teacher.

Outside of the classroom, Laura is active with the “Be More Kind” club, the tennis team, and the cheerleading squad. Cheerleading was a sport she was particularly interested in joining in the United States since she is part of a cheerleading club, Honeybees Cheerleaders TV Jahn Wolfsburg, at home. Through cheerleading, she volunteers at a local elementary school helping coaches during practice. She says that she really enjoys working with the younger cheerleaders since she coaches 5 to 10-year-old kids in Germany. She also volunteers with both the “Be More Kind” club – volunteering at school dances and leaving kind messages on mirrors throughout her school.

She enjoys answering questions about what it’s like being a teenager in Germany. She explains, “I realize it doesn’t matter if you’re in the United States, Germany, or another country. We all basically live the same life and 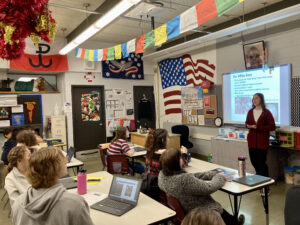 have similar issues as teenagers even if we live thousands of miles apart.” Of course, there are cultural differences, and Laura especially likes learning about the small daily differences between life in the United States and Germany. For example, when she arrived in the U.S. during the summer, she was always cold because everyone had the air conditioning on – something that she wasn’t used to in Germany!

Laura also enjoys exploring cultural differences through food with her host mother who introduced her to pigs in a blanket, stuffing, and crockpot chili. Her favorite American dish so far is chili, which she plans on making for her family when she returns to Germany. For Christmas, Laura made her family’s recipe for strawberry marmalade cookies with hazelnut flour. Laura feels like she has a second home with her host family and loves sharing interests like photography, and simply spending time together. Laura’s host mom is even planning on visiting Germany after Laura’s exchange year!