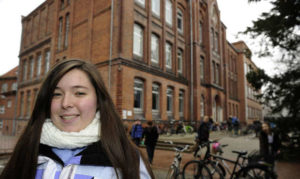 Celle, Germany – “It is not what I have experienced, but who I have met that I will remember the most,” says Katie McAuliffe. The young American from Beverly (near Boston, Massachusetts) arrived in August to live for a year in Celle. She is part of the Congress-Bundestag Youth Exchange (CBYX), an exchange between the German Bundestag and the US Congress. Celle’s representative Henning Otte is her Sponsor. In Celle she lives with a host family.

The 18-year old is in the 11th grade at Kaiserin-August-Viktoria Gymnasium. It is exactly the right school for the musical American. At Bevery High School she sang in the Chorus, played trumpet in the Marching Band and Concert Band, played trombone in the Jazz Band, and was also often in musical and theater productions. At KAV [in Celle, Germany] she plays in the Big Band. In Germany the number of students in one grade is much smaller than in Katie’s hometown. There were 280 students in her grade in Beverly High School, and in the 11th grade in KAV there are only 83. “This makes it easier.”

Katie finds the differences between Celle and her hometown to be not so huge. One of the differences that she really likes is that in Germany, the warm meal of the day is eaten at lunch-time and not in the evening. “It makes sense!” “I don’t miss anything too much here except maybe ‘cheez-its,’ a typical American junk food,” she says laughing. However, the lack of crackers was compensated with lots of Christmas cookies. “Making lots of Christmas cookies is a big deal here,” she says.

Katie has already been to the German Bundestag in Berlin where she met with Henning Otte. She also has different orientation camps throughout the year where she meets other exchange students from AFS [one of the five non-profit exchange organizations implementing the CBYX program for Americans]. When she is not doing that, she explores Celle with her new friends. She quickly established: “I love the typical German architecture, or half-timbered houses.”

Katie is currently visiting various schools and speaking about her homeland. If you would like to learn more about that you can contact the local office of Henning Otte.

The original version of this article in German appeared in the Cellesche Zeitung, January 21, 2012.