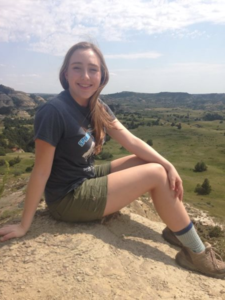 CBYX 2017-18 participant Caroline P. of Maryland, hosted in Husum, performed a two-week hands-on internship in the field she is passionate about, medicine.

As a member of the eleventh grade here in Germany, everyone at my school must do an internship, and as an exchange student interested in medicine, I decided to pursue an internship at a hospital. After asking my school and my host father (who works as a radiologist in the hospital), I was able to organize my internship! The last step was to write a formal letter in German to the head of the surgery department, which is where I wanted to be.

My efforts were successful, and I am now halfway through my two-week internship, or “Praktikum,” in the local hospital. At first, I was really nervous. Even as a fairly mature person, I was still worried that I would be an annoyance to the doctors. I did not want to be in the way, and I worried that I would not know enough German to do or learn anything. Despite my uncertainty, I found a warm and welcoming group in the surgery department. They were all quick to welcome me, and unless they had to do something of the utmost importance, they were willing to show me around the hospital, explain things to me when I did not understand, and give me tasks. 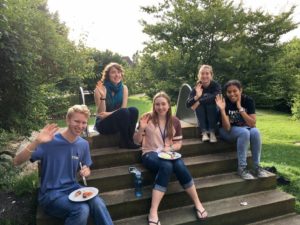 This past week has been one of the coolest experiences of my exchange year: I have been able to witness my first in-person surgery (fourteen of them, in fact!), meet and interact with patients, learn the inner-workings of a hospital, and improve my German vocabulary and speaking ability. I have also been able to share my CBYX story with my peers, as well as explain about what life is like in the United States – both of which are important goals for this program. Most of my peers had heard of the program (by its German name, “PPP”), but had never met a scholarship recipient. I got the feeling that I was being given the chance to represent myself, the CBYX/PPP program, and the United States in a positive light.

This internship isn’t always easy – I have to be in the hospital at 6:30 am, I don’t always understand what is happening, and I sometimes have nothing but a surgery book to look at when the others must do paperwork. But, it has been so rewarding. I have met so many interesting and inspiring people – doctors and patients – and have learned valuable skills that will aid me when I go to medical school in the future. I have done so much, such as changing a patient’s bandage, feeling a recently-removed gallbladder, and flipping though German medical books. I have one more week at this internship before I return to school, and I already know that it has been a short, but incredible experience. I am grateful that I was able to be a part of the hospital community, and I hope that I will continue to be an active member in other communities in my town as my exchange year continues.