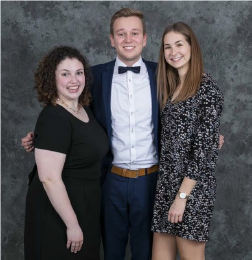 One of the most memorable times I have had in Germany is gong to my host sister’s Abtanzball! In my host community, it is popular for teens to learn how to partner dance, and it is my host family’s tradition for every member to learn how to dance. It was really fun and intriguing for me to attend her Abtanzball, because there’s nothing like it where I’m from. All of the teens that go to the dance school practice their dancing for the whole year, then they get dressed up in formal attire, and invite their parents and friends to the event, a kind of ‘debutante ball’ where the dancing school shows off their graduating students.

The day finally came, and my host sister was so nervous, but we all knew she was going to be amazing! The whole family came along, and we filled up an entire 10-person table. The dancing couples paired up and were introduced, filing out onto the dance floor one by one and taking their places. The dancing began, and everyone looked so gorgeous and the dancing was so cool! Other dancing schools from the area came and did their own routines, and finally my host sister’s class did their hip-hop routine. It was so much fun to watch and clap along!

As the night wound down, all the students did informal dancing and just had fun. There was a professional photo studio there, so my host brother and his girlfriend took me over and took some pictures with me! It was so sweet, and I got the picture framed from them for Christmas. Even though I didn’t know how to dance, my host mother dragged me out onto the floor and tried to teach me how to! It was so much fun, I was laughing and embarrassed the entire time, but that is something I will always remember!

Later it was time for judges to find the Abtanzball König und Königin (King and Queen), so the couples paired up again to dance. The audience was encouraged to shout out the couple’s number to help the judges choose, so the whole time our table was cheering for my sister (even my host father and uncle)! It was so funny to see two adult men screaming at the top of their lungs for a dancing couple, and it was another thing I will never forget!

At the end of the judging period, the König und Königin were finally announced! They started at fifth place, and as they got closer to the top, we kept hoping that my host sister would be chosen! Once the judges got the winners, all of her friends had been called, and she and her boyfriend had won! It was so cool, and everyone was so excited for them! It was the perfect end to the night and my first Abtanzball.

The whole time has really inspired me to learn how to partner dance, and I will be starting classes soon! It was a very German experience that was so much fun, and that I will always remember from my year abroad.