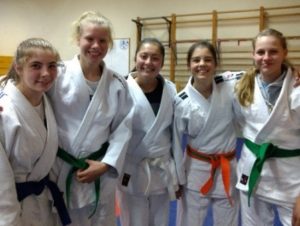 CBYX 2017-18 participant Ailish F. of Massachusetts, hosted in Greifswald, reflects on stepping outside her comfort zone by trying new activities in Germany.

When I learned I would be going to Germany for a year, I promised myself I would take every opportunity I got to try something new. So, when my host parents asked if I would like to go to judo with my host sisters, I thought, “Why not? I should at least try it out.” On the way to our first practice, we met up with two other girls, and I was so excited because they started asking me questions about myself, my family, and the United States – and I could actually understand what they were asking! I’m sure my answers were far from perfect German but being included in the conversation made my day.

When we got to judo, I felt very out of place because not only was I the newest, lowest-ranking student, but I could also barely understand any of the instructions. Nonetheless, everyone was welcoming and tried their best to demonstrate and help me with different techniques. When the class was over, we all chatted outside and then went our separate ways. The next week, I decided to go again. It was a pleasant bike ride there, and it was nice talking to the other girls again, too. When we arrived, we walked inside, and one of the girls from class greeted me and said, “Hall, Ailish!” I was ecstatic! Not only did she say hello to me, but she remembered my name!

I now go to judo class twice every week, and it is so nice to feel like I belong in the class. Judo is something I doubt I would have ever tried if I were still in the United States, but although I’ve only done judo for a few weeks here in Germany, I’ve already lost count of the memories I’ve made. Stepping outside of my comfort zone has shown me that I can do a lot more than I thought, and the reward of laughing and bonding with new people makes it all worth it.