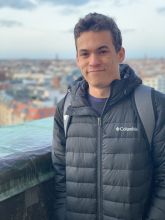 2019-20 CBYXer, River H., shares how to celebrate Thanksgiving in Germany.

This week, we were able to share one of the oldest and most celebrated traditions of American culture with our German host families: Thanksgiving! There is a similar holiday in German called Erntdankfest, but it isn’t celebrated as much and isn’t quite the same thing as Thanksgiving. It was exciting to show what the differences were, provide context to why Black Friday exists, and explain why you can’t put up your Christmas tree until after the fourth Thursday in November!

After school, I took the train to visit a couple of my CBYXer friends, who were having a Thanksgiving dinner with their host families. None of us had ever cooked a Thanksgiving dinner before, and our host families were really looking forward to the food. There was a lot of pressure on us to perform! We started with the turkey, and then moved on to make macaroni and cheese, stuffing, mashed potatoes, and sweet potato casserole. The ingredients were very hard to find, especially the turkey, but our host families helped us a ton with finding the right ingredients. I’m sure people at Aldi were wondering why a bunch of Americans were buying a bunch of random vegetables and sodas! To top it all off, we had apple and pumpkin pie. It took a few hours to make everything, but we were able to finish before it got too late. 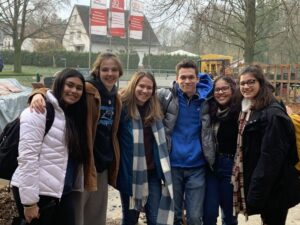 If you’re ever in Germany and are thinking about having your own Thanksgiving, be sure to plan in advance! It will definitely take longer to cook in Germany than in America. If you can’t find a turkey, a chicken is always a good substitute, and also just as tasty! Pie crust is also a little hard to find in Germany, so our pumpkin pie ended up looking more like a pizza! Other than those few small challenges, the preparation process actually went very well, and it was a lot of fun getting to cook with two American friends in a foreign country while your German friends watch in dismay as you make a mess in their kitchen!

Once we were finally finished, we all gathered together at the table and explained the traditions to everyone there. We had a big crowd of about twenty people, and the food was a big hit! One of the most fun things about the night was finally being able to sing Christmas music! Mariah Carey would be very proud.

On Saturday, I was able to have another Thanksgiving, this time with some friends in North Rhine-Westphalia. A bunch of us left pretty early in the morning so that we could help cook, which also included a trip to the grocery store. After buying the things we needed, we came across American root beer and Milka chocolate on clearance, and obviously we couldn’t resist!

The dinner this time was very similar to the one from Thursday, minus the macaroni and cheese. We cooked for six hours straight after getting home from the grocery store until we finally served dinner. After eating more sweet potato casserole, we all decided to go to the Christmas market in town before getting back on our trains to head home. We saw lots of beautiful candles, Christmas trees, and drank hot chocolate to stay warm in the freezing weather. It was a great way to end the day and reward ourselves for all of our hard work!