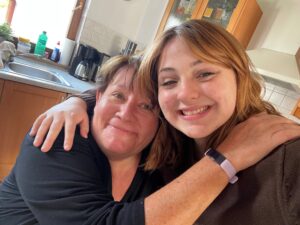 The German Bundestag and U.S. Department of State are pleased to announce Maddison Schwenter as the October Congress-Bundestag Youth Exchange (CBYX) U.S. Participant of the Month! Maddison, a CBYX high school program participant from Lake Jackson, Texas, and recruited by CIEE, is hosted by the Bettina family in Frei-Laubersheim, Rhineland-Palatinate.

Prior to her exchange year, Maddison imagined that Germans would be very different from Americans and that it would be hard to adjust. However, soon after arriving at her German school, she started making friends. She expresses that interactions with Germans in her community are teaching her that “people are the same everywhere you go.” “People are just people,” – which is a lesson she believes is important for individuals around the world to understand – and she hopes to share that lesson with Americans when she returns home. Understanding that there are cultural differences between Germany and the U.S., Maddison believes that “exchange programs like CBYX are vital because they teach young people to respect cultural differences between different peoples” and that “exchange programs allow for an inside look at a culture someone might be interested in.”

One major difference she experiences is her German school’s scheduling structure. In the United States, she is often at school from morning until late afternoon, but in Germany, she sometimes has fewer than three classes per day. Both her German classmates and American friends are interested in leaerning about this difference. She keeps in contact with her German language teacher in the U.S., the person who encouraged her to apply to CBYX, about her experiences in her German school as well.

Altough Maddison is surprised by the rapid speed with which German is spoken in her high school, she is dedicated to her language studies and feels confident she’ll speak like a pro with time. She also feels prepared by lessons received at the language camp that CBYX participants attend at the 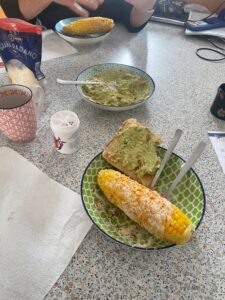 beginning of their program year. Her langugage camp teacher encouraged the class to only speak in German during lessons and created an immersive environment which Maddison says has truly prepared for transitioning to a German high school and living with a host family.

Maddison felt at home the minute she arrived at her host mom’s house. Her host mom introduced her to the game Phase 10 which they often play. They find that playing Phase 10 and other board games is a good way to spend time together and establish a close bond (as well as also sparking some inside jokes!). Maddison says her favorite thing about her host mom is that “she’s such an easy person to talk to, and she’s very easy to be around.” She also says, since her host mom has two boys, “she’s glad to finally have a girl in the house!” When they are not playing games together, they engage in many other activities: so far, they experienced the river Rhine, went grape picking, as well as other activities in their community.

Born in Southern California and raised in Texas, Maddison is teaching her host mom about some of her favorite foods from home – in particular, Mexican and Creole food such as elote and guacamole. If she can find the right spices, her next foray into culinary diplomacy will be to make po’boys for her host mom!